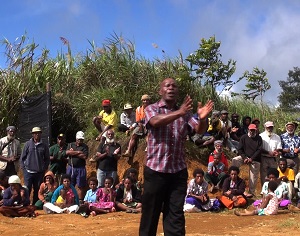 Dr. Kalinoe said two teams were endorsed by the National Executive Council to go to the LNG Corridor and complete the Landowner Benefices exercise.

“Their task is to complete all the requirements in the 2009 Land Incorporated Group Act and assist traditional landowners to register their land under the act,” Dr. Kalinoe said.

These two groups include a State Team consisting of all relevant government bodies and a mediation team, headed by Senior Judge, Justice Ambeng Kandakasi.

The land exercise is part of the government’s National Land Development Program.

In July, the National Court had directed all PNG LNG court proceedings to mediation following continuous concerns raised on the proceedings in cabinet.

This means the two teams tasked to conduct the land exercise will ensure the landowners prepare sketched maps of their customary land and present birth certificates before they will be given an ILG certificate.

This huge exercise is funded by the National Government under the NLDP Program and will see landowners gain legal titles over their customary land.

It is set to kick off next Tuesday.

A Bright Christmas to Come