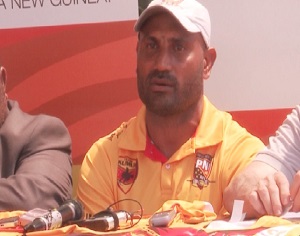 Michael Marum has been named Interim Coach of the PNG Kumuls for the Pacific Test Match against the Fiji Bati’s in Sydney on May 7.

Marum has been an integral part of both the Kumuls and SP PNG Hunters program over the past decade, and makes for a fitting replacement for Mal Meninga.

PNGRFL Chairman, Sandis Tsaka, said the 42-year old is no stranger to Rugby League having played and coached the game at many levels and is fitting for the job.

Marum himself has played in the local leagues before making a debut for the Kumuls in 2000 before taking up coaching responsibilities.

On the international level, Marum was assistant coach to Adrian Lam, Stanley Gene and Mal Meninga.
He said he was privileged to take up the role as Kumuls coach for the match against the Batis.

Marum’s coaching techniques with the Hunters will be the same with the Kumuls, but may vary because of the level of competition.

Marum’s role as Kumuls coach is not permanent, it’s only for the match on May 7 in Parramatta. Following the match, the PNGRFL Board will appoint a permanent coach to lead the Kumuls to the 2017 World Cup.