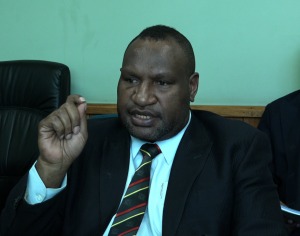 Finance Minister, James Marape, says the 2016 fiscal year will be hard and tough.

Minister Marape said expenditure control would be the only tool at the government’s disposal.

He maintained that spending would be strictly on core government priority areas, as pointed out in the budget.

“We will be taking stock of our expenditure after experiencing the shortfall in revenue forecast in 2015,” said Minister Marape.

The Finance Department will be balancing government books to present account reports from 2009 to 2014 and 2015 in the March parliament session. Minister Marape also announced the ceasing of all government issue cheques of 2015.

“I called on service providers to present their unpresented cheques to relevant government departments and because only genuine claims will be tolerated in 2016,” Minister Marape said.

Finance Department Secretary, Dr. Ken Ngangan, has called on all government departments to work with Finance and achieve its objectives.

“All government departments will be asked to assist Finance and achieve our objectives for the 2016 fiscal year,” said Secretary Ngangan.

The Finance Department will be working closely with the commercial banks to control the government’s spending and cash flow in the country.