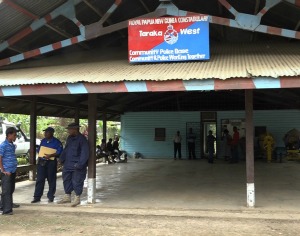 After opening its doors nearly two years ago, the West Taraka police station services approximately 50,000 residents around one of Lae’s most notorious beats.

Staffed with a station commander, three constables and a police vehicle, the station is facing a number of ongoing challenges.

“The manpower and logistics challenges are real, we have to be seen around the suburb so it reminds the people not to break the law,” said Rimbo.

Every complaint needs to be treated with a car, due to many of the areas they service only being serviced by the single road in and out.

The government is slowly addressing concerns in Madang, Lae, Goroka, Mt. Hagen and Port Moresby regarding the lack of a police presence in many of these major cities.

More recruits are being trained in Bomana to take up posts in police stations around the country upon completion of their training.

But for now, places like West Taraka will continue to feel the pinch of a police force that’s struggling with numbers.