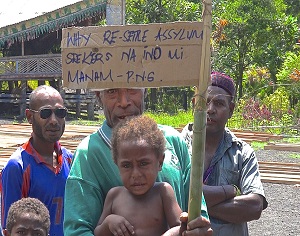 The Madang Provincial Government’s Disaster Office has responded to questions raised by Manam Islanders, and the Bogia representatives, as to how the monies sent for their relief supplies have been used.

The islanders, speaking to EMTV today, said they are fully aware of the monies aimed at providing their relief supplies. They said they have knowledge of the release of K250,000 by the Prime Minister, and another K50,000 by the National Disaster Office earlier for the relief operations.

The representatives said that the 10 kg bags of rice, flour and one litre of cooking oil plastics, which are distributed to each family, have run out.

Responding to these queries, the Madang Provincial Disaster Coordinator, Rudolh Mongalee, said that the first two relief shipments to the island is not a one off exercise, there are other shipments still to come but that will only happen when more money gets passed on to the provincial level.

Mongalee confirmed that his office has received the K250,000, as ordered by Prime Minister Peter O’Neil, as well as the K50,000 released by the Papua New Guinea National Disaster Office.

Mongalee said the office currently has the remaining K67,350 put aside awaiting additional funding, before more supplies can go to the people this month and in the month of October.

He added that the K50,000 received from the National Disaster Office on the other hand was spent on logistics.

Meanwhile the Bogia people, through their representatives, are again calling on the national government, to discuss the Manam Restoration Bill before the bill gets passed next month.

Use of Kerosene Lamps Die Out