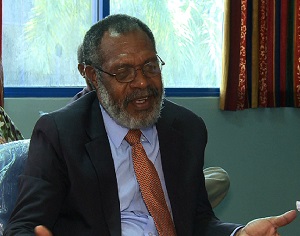 It’s quite an unthinkable thing to become a refugee in your own country.

But for Manam Islanders in the Madang Province, a volcanic eruption on the once peaceful island has made them natural disaster refugees in their own district.

After 11 years of intense struggle in care centres, the proposal to permanently resettle them in Andarum census division is expected to go through the first reading in Parliament this session.

The Manam Restoration Act (MRA) was introduced in the Parliament by Prime Minister Peter O’Neill on 26 June this year.

In 2004, the volcanic eruption on the island devastated the entire communities. Food gardens and river streams were polluted, forcing islanders to be rescued and transferred to care centres on mainland Bogia.

Government relief supplies ceased after a year, forcing the people Manam to farm nearby coconut plantations, and build houses from the few trees that were available.

Their stay in the care centres dragged on. Weeks turned into months, and then years. Gardening the same land area and living in traditional houses with limited chance of maintenance became an every day occurence.

Continuous fighting with mainland Bogia landlords has also been common.

Volcanologists have prevented their return to the island because they say volcanic activities are continuing, and in fact, worsening.

Madang Governor Jim Kas said this is only the beginning and there is still a long process that lies ahead, regarding resettlement.

“We have a lot of anticipation for the bill to be passed by Parliament this session.

“It is now becoming the government’s business once introduced to parliament and I have representatives from Manam and Bogia host communities in Port Moresby to witness the bill go through its reading,” Kas said.

A Manam representative, Peter Muriki, said the process to be finally resettled in Andarum will take a long time.