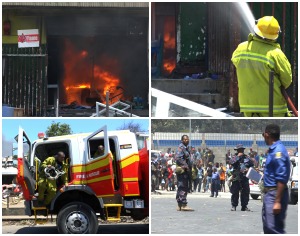 The Malaoro Supermarket in Port Moresby went up in flames at approximately 11am today. According to Jason Albert, an eyewitness, the fire started in the warehouse (which is located on the first floor of the shopping centre).

The fire department was alerted soon after and two units from Boroko and Gerehu rushed to the scene in an attempt to extinguish. Police units were also called to the scene to evacuate by-standers and stop opportunidts from looting the shop.

It is understood that over K3 million worth of goods was destroyed.

Chief Superintendent for the Fire Department, Akia Koia, said an independent investigation into the cause of the fire will soon be established.

“At the moment, we cannot establish the cause of the fire but there will be investigations to find out the cause,” Superintendent Akoi said.

The Malaoro Supermarket is the third infrastructural fire in Port Moresby following the Erima and Five Mile fires.