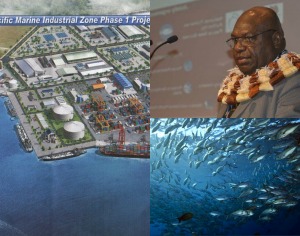 The national government expects to see a 50 per cent increase in Papua New Guinea’s tuna exports after the Pacific Marine Industrial Zone (PMIZ) is completed.

Future projections estimate that PNG’s K200 million tuna export value will double to K400 million once the nine canneries are in operation.

The controversial project was launched yesterday after a 10-year delay.

On November 24, the controversial PMIZ was launched.

The government will pass new policies to safe guard this investment next year.

Fisheries Minister, Mao Zeming, stated the policies at the opening.

“This government will introduce a policy that fishing companies that fish in our internal archipelagos shall process 100 per cent of their catches in PNG,” he said.

The national government is going to create policies to ensure that Papua New Guinea’s economy benefits from the tuna processed on shore.

The PMIZ project was built from a K200 million concessional loan from the Chinese Exim bank.

The project was delayed for nearly 10 years due to on-going court battles over environmental issues and land ownership.

Prime Minister, Peter O’Neill, was at the launch and said that people in the area must be open to development.

“People of Madang you must be part of that growth, the only reason way we are not seeing changes is because we are not allowing investors to come in and work with us,” the Prime Minister said.