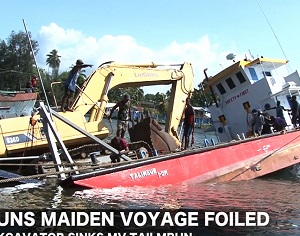 The maiden voyage for MV Talibun, a vessel belonging to the Middle Ramu District in Madang, has failed due to the vessel sinking.

It all started well when MV Talibun was loading its first freight transport, a 90 tonne excavator for the building of roads in the district , when things started falling apart.

District officers and crews jumped for their lives as the boat and excavator toppled at the Binnen Harbour and started sinking.

An eye witness says, the vessel was too small to accommodate the 90 tonne excavator that lead MV Talibun to becoming submerged in the water. Meanwhile, the driver of the excavator had fled the scene and left the excavator behind.

No injuries or casualties were reported. Both the vessel and excavator are still submerged.

The vessel was launched 2 months ago by Middle Ramu MP Tommy Tomscoll.