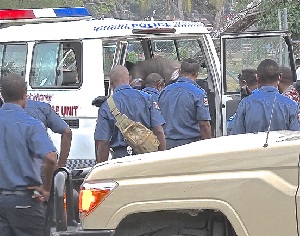 The Madang police have successfully caught two members of the pirate suspects, who are holding up and stealing from people travelling to and from the islands.

The suspects were caught, after they held up a boat containing 11 people, and were reported by a couple who sighted the boat, and after witnessing suspicious movements alerted the police.

The passengers on the boat were ordered to get off the boat in the middle of the sea, at gunpoint.

“Every one of those youth boys, more than eight who held us up had weapons from bush knifes to homemade guns,” said Asa Arek, one of the victims.

Five adult men and a teenager swam for more than two hours, before they were helped to shore by another boat, while 6 others including the infant were taken with the boat.

“One of our brothers who’s very sick, his wife and their three children, and another passenger’s child whose father was shot on the leg for not jumping out quick, were taken away with the boat because the woman had an infant, and her husband was too sick,” Arek said.

Swift reactions by the police, had them catching up on time to recover the abducted passengers, who got dropped off on land.

Most of suspects escaped while firing shots back at the police.

Meanwhile, the Madang police want to thank the couple who alerted them, and are also calling on the public to do the same, to help play a part to cut down on the frequent robberies.

Speaking to other Islanders, it is understood that there’s been a series of robberies at sea recently, as well as recent major robberies which have also seen robbers escaping by boats.

Members of the public are now calling for police presence at sea, as much as on the land. However, the Madang police are going through a struggle, exhausting their current manpower, that’s currently at the ratio of 1 is to 3,000, against the Madang population.

Gender-Based Violence Addressed Through the Church