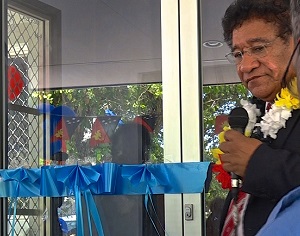 The Department of Justice and Attorney General (DJAG) has officially launched a Madang Provincial office today.

Sir Ano Pala in his speech said, that in the lower courts, his Ministry is working on similar changes, where the current District courts will become Provincial courts, with Provincial Jurisdiction.

He went on to say, that the new district courts will be established in all 89 Districts of the country, with District Jurisdiction, along the lines of the now abolished local courts of the 1990s.

Sir Ano Pala also announced, that the current National court will be retained as trial court. He said the Legislative reform work has been completed, and the Constitutional amendments to effect the changes are now before parliament, to be passed in the October sitting.