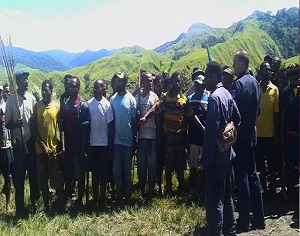 Early last year, Ramu became the scene of gruesome sorcery related killings. A man was beheaded and five others killed, including children.

200 suspects were arrested; and the killings brought to attention, the lack of policing in Papua New Guinea’s rural areas.

In early april of last year, the Madang police retrieved the bodies of victims killed by about 200 suspects, over sorcery claims.

In the months that followed, investigations were marred by funding problems, after the suspects were arrested.

In an interview late last year, Madang Provincial Police Commander, Sylvester Kalaut, described the killings: “It was like a cult thing, where they go out and kill.”

Earlier this week, the Madang Governor, Jim Kass and Chief Superintendent, Sylvester Kalaut visited the area again in a show of authority. In addressing a crowd of people, they both urged the men to stop taking the Law into their own hands.

“The community needs to be reminded that there are processes of law and order.”

Police presence in rural areas is lacking, due to of limited resources and logistics to enable them to enforce law and order; and that’s something that the government needs to fix.