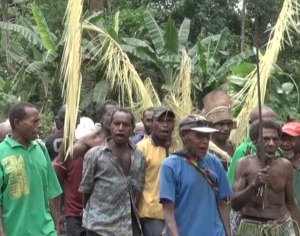 Landowners of the Sepik Plains, which houses the Special Economic Zone, are excited about the Sepik Plains Project thanks to the many spin-off benefits and improved income per capita that will come from it.

Locals expressed satisfaction and gratitude to the investor from Israel, the LR Group, for their interest in developing their province.

According to village chief, John Nugi, this is the portion of land that the forefathers in 1969 gave the state for development. However 46 years on most of them have passed away, without seeing any development.

Nugi expressed these words to the delegation led by Yangoru-Saussia MP and Commerce, Trade and Industry Minister, Richard Maru. The delegation comprised of Israeli investors from the LR Group, and Kumul Consolidated Holdings.

“46 years, we have been waiting. Even though we gave this land for development, nothing was done. Until when Mr Richard Maru, entered the Parliament, then he opened the discussions of this very important project,” Nugi said.

The investors were impressed with the Sepik Plains, and it is expected to bring many positive impacts; more employment opportunities, more income and many other spin of benefits.

Ilan Weiss from the LR Group said they cannot wait to kick start this project.

“We cannot wait to come. In this project, we will engage locals and start projects like poultry, cocoa and produce also stock feed,” he said.

According to Kumul Consolidated Holdings General Manager – Investmen’s, Luts Heim, he said that the mandate requires investing in commercial terms and bases, and they were pleased with the vision driven by Richard Maru.

“And we are excited with the minister’s vision and all indicators are good at the moment, and we will enter into a discussion to finalised the documen’s,” Heim said.

Local MP Maru, said the national government is keen to support this project with an initial allocation of 5,000 hectares of land.

The primary target is to improve the production capability in the domestic market and make it competitive in the international market.

“Initial projects like chicken and cocoa. The primary target is to produce chicken for East and West Sepik and if possible in the long term export to Indonesia,” Maru said.

Another interest is to produce local feeds, to allow reasonable prices for consumer goods like poultry.

“We will locally produce feed, instead of that very expensive import from Australia. This makes cost of children very expensive compared to other markets in the world.

“The government is very keen and potential investors are invited,” Maru said.

Locals thanked Maru, through his leadership, for opening the doors to this project.

We spoke to Jennifer Homio who said the project is a first of its kind that will bring change.

“It will change our way of living. With more investors, more money comes into our country, province, community and families as well as individuals,” she said.

The project is part of the Sepik Special Economic Zone Project, established as an agro-industrial center, costing K50 million.