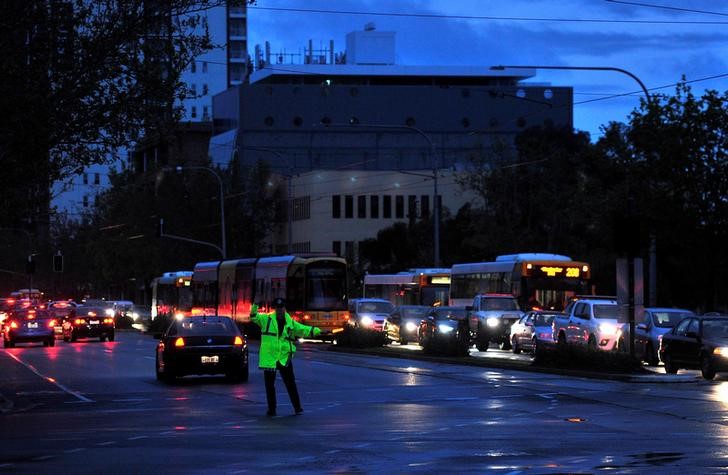 By James Regan and Tom Westbrook

SYDNEY (Reuters) – Severe storms and thousands of lightning strikes knocked out power to the entire state of South Australia on Wednesday, authorities said, leading to port closures and commuter chaos.

South Australia is the country’s fifth most populous state, with 1.7 million people and Adelaide as its capital, and is a major wine producer and traditional manufacturing hub.

The Bureau of Meteorology said a vigorous cold front was moving across the state with an intense low pressure system due on Thursday.

“We’ll have gale force winds and large seas (across the south of the country); also heavy rain and thunderstorms, which will lead to renewed river rises,” it said on its website.

“There were more than 21,000 lightning strikes recorded over a 12-hour period from midday yesterday on the West Coast, and as a result it is likely some damage has occurred to our distribution network,” it said.

The state had been brought to a standstill, with ports closed, trains and trams stopped, traffic lights out and long commuter delays, state agencies said.

South Australia was relying on accessing power from Australia’s populous east coast via a power interconnector with the neighbouring state of Victoria when there was a failure on Wednesday.

No power was flowing from Victoria into South Australia, said a spokesman for the Australian Energy Market Operator, which operates the power systems in southern and eastern Australia.

When the state tried to compensate, it experienced what is known as a “voltage collapse”, Simon Emms, executive manager of network services at network operator ElectraNet, told ABC Radio, due to storm damage to power lines. This led to a statewide outage.

A spokeswoman for Electranet said power was being restored to some areas of Adelaide, but could not say when the lights would go on across the state.

The impact was wide-ranging, with traffic coming to a standstill in Adelaide while power supplies were disrupted to BHP Billiton’s Olympic Dam copper-uranium mine, a huge mining operation more than 500 km (300 miles) to the northwest.

PNG Power not ready for privatization

Husband and Wife Contest in the ABG Elections