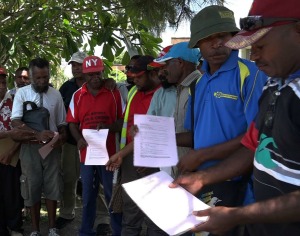 Leaders of the five factions involved in the clash at Boundary Road Settlement last year, have been summoned by the Law and Order chairman and the Community policing unit.

They are summoned to appear for mediation next Tuesday.

The mediation will attempt to find a way forward in the ongoing conflict between various highlands and Morobe groups.

Last year, several houses were burnt; at least three men were killed and others seriously injured.

One of the triggers of the fighting has been alcohol consumption.

Lae District Law and Order Committee, in partnership with the Lae Community Policing unit, have tried to restore normalcy in the community. But, due to the tension, the committee was not able to hold mediation last year.

“We issued summons to the leaders of the different factions involved in the fighting so that they must attend the mediation next Tuesday. This is because last year some leaders did not turn up for mediations when we asked them to,” said Oyaya.

Last year, the Law and Order Committee issued a preventive order to the different factions involved in the fighting.

They also warned that the troublemakers would be forcefully evicted if they continued with the violence.

But, this preventive order has not been effective.

The Law and Order Committee issued summons to the leaders to appear for mediation at the Niall Oval next Tuesday. Community Leaders who fail to appear next Tuesday will be arrested.