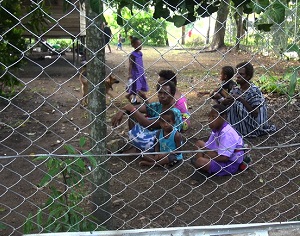 A family from Goilala, who reside in a suburb of Port Moresby, were surprised to learn that their family home was owned by someone else.

The owner of the home, Kenny Peter, bought the land at Morata One in 2000, without a land title from the locals.

However, her many attempts to secure land title at the Lands Department were quashed, with one of her neighbours already owning the property since 2013.

Yesterday, Kenny and her underage children, nieces and nephews, along with her aunt Rita Moi, spent the night outside in the open air.

During the day, they were forcefully evicted from their home, by five aggressive policemen, four dressed in uniform and one in civilian clothes.

When asked why they were being evicted, the men aggressively swore at them and told them that the land belongs to someone else.

They even threatened Rita, who is in her mid-50s, that they would burn her inside the house, if the family refused to move out.

Without hesitating, Rita brought her four grandchildren aged two to six years old, and removed their belongings from the house.

Kenny now questions the process and the paperwork involved in getting land titles.

She has been trying to get one since the year 2000, but thus far has not yet received one.

She claimed that since her neighbour knew what her problem was, and since the neighbour was in a good position to easily get the title through a back door deal, she is now left homeless.

Meanwhile, the NCD/Central Commander, Sylvester Kalaut, has warned police officers that anything to do with eviction must come to him first.

He will only direct police to conduct evictions upon the presentation of a National Court Order.