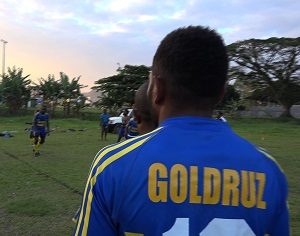 The youthful team has provided two players to the Prime Minister’s XIII team for this weekend’s clash against the Kangaroos in Port Moresby.

Sydney Fred and Samuel Maniat have been named in the squad.

The team is now focusing on making the grand final.

Goldruz Rangers is a little known rugby league club in Lae’s competition, but it has certainly made its mark on the pitch this year.

Commitment, determination, energy, discipline and the belief that they can walk amongst the greats in Lae’s footy fertility has brought them the minor premiership, and they hope for their hot form to continue.

The team has stuck to the basics of rugby league, though lacking in size they have played with heart after losing several of the opening matches and forfeiting three.

“The Snax Tigers captain, Sydney Fred plays for us and Samuel Maniat who has also made the Prime Ministers XIII team without taking part in the semi-professional competition,” said Club Patron and Goldruz Managing Director, Russell Gardener.

PMIZ Has Potential But Lacks Dialogue