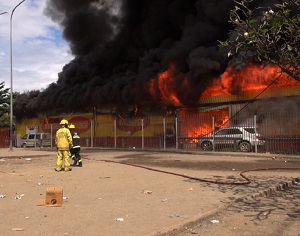 Lae Police have confirmed that a fire on Friday at the town’s main market area has killed an expatriate woman.

The woman is believed to be of Asian descent, and perished in the fire that destroyed Lae’s Xing Zheng store.

Lae Police CID can only confirm at this stage that she was burnt when the fire engulfed the whole building, with investigations continuing to find the identity of the woman.

The circumstances surrounding her failure to escape from the burning building are as yet unknown.

On Friday, swift action by PNG Power personal to secure main power lines and the Lae Fire Service containing the fire saved other lives and properties.

There have been 16 fires in the space of two years in Lae, with Prime Minister Peter O’Neil saying that the fire service would be improved back in October of last year.

“We will increase the number of equipment that they have,  as well as training that they have so they can respond to any emergency,” said Prime minister O’Neill.

Unfortunately this has not yet been delivered.

On 8 March this year, Deputy Prime Minister Leo Dion said a proposal will be tabled in parliment.

“A proposal will be given to NEC to seek the governmen’s financial assistance, and recognising outside expertise coming into the country,” said Dion.

The series of Lae fires continue to expose the city’s fire service, left to contain industrial fires with inferior equipment.