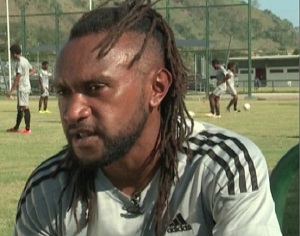 26 year old Koriak Upaiga reigns from the Morobe Province and is one of Hekari United’s elite fullback, turned striker.

Following his departure from Welgris United in the Telikom NSL, Upaiga had never imagined he’d be playing for Papua New Guinea’s lead team, in the semi-professional competition.

When Koriak Upaiga took the chance to leave his Welgris in the early stages of the National Soccer League, he never thought playing for Hekari would have brought him this far.

Oceania Champions League opportunities, a regular in the senior national team for Papua New Guinea and a shot at the club world cup, the 26 year old has gone where few Papua New Guineans have gone before.

He started off his career playing as a defender, gradually moving into an attacking position, drifting out onto the flanks, he combined well with Solomon Islander, Tutizama Tanito, for a devastating combination in 2015.

Recently it’s been Jeremy Yasasa playing in his old position, as Upaiga the man originally from Morobe but raised in the Western Highlands, has now been pushed up to the fore of Hekari’s attack.

Able to slide easily between defenders and utilising the best of his left foot. His feats, placing him at the top of the both the Southern and Northern conferences with 9 goals- andd that comes as a surprise.

In a side boasting some of PNGs best attacking talent, as well as imports from the Solomon Islands, Fiji and Vanuatu, their go to man.

Playing alongside some of the country’s best players, has been a humbling experience for Upaiga, and one that he hopes will one day, be an example to the younger generation of PNG footballers.

Hekari are fighting on two fronts as they have for the past few seasons.

The campaign in the domestic Telikom NSL is going on track, but that is to be expected, with the quality they possess.

But, for Coach, Jerry Allen, and Manageress, the target has always been the Oceania Champions League, a platform that Upaiga is familiar with.