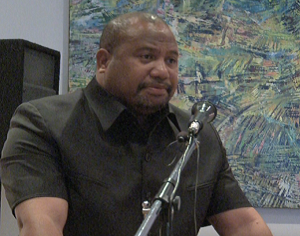 The Konebada Petroleum Park Authority Board has been appointed, after seven years.

They are: Roha Kevau as Chairman, Deputy Chairman, Ralf Saulep and Sisia Morea as Director.

The board has a mammoth task in developing the Konebada Petroleum Park which has been dormant for years.

Minister for Petroleum and Energy, Nixon Duban, wants the park to be put to use immediately.

Since its establishment in 2008, the park has seen very little development.

The lack of leadership was largely to be blamed, as there wasn’t a board to take charge of the development plans of the petroleum park.

The appointment and swearing in today of the first board members of the Konebada Petroleum Park Authority charts a new course for future developments of the petroleum Park.

Minister Duban challenged the board members to ensure that the petroleum park fulfils its purpose.

Duban says, the petroleum park holds huge benefits for the people that are yet to be realised.

It is hoped that the 200 hectares of petroleum park will be ready to accommodate the 2nd Papua LNG Project.

Prime Minister Not Happy With Opposition