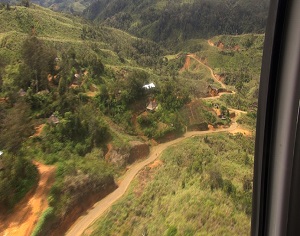 The rough terrains of Kompiam Ambum district has never made it easy for the construction of road access. But, the district is breaking barriers with investing in machines to build main access points for its rural communities.

Pundari maintained that roads will remain a key development for the district.

“That’s why we bought machines and trucks to build more roads and give access to places”, said Pundari.

Other major roads for the district is the Birip –Kompiam Upgrading, which the contracts have been signed and the Ambum road which the district has tendered, and cleared by CSTB and State Solicitor for sealing, but awaiting Works Minister, Francis Awesa, to take to NEC.

The construction of trunk roads and feeder roads has also see the building of schools, health centres and community centres.

MP Pundari thanked the O’Neill led government for funding DSIP’s and the commitment in building roads in the district.