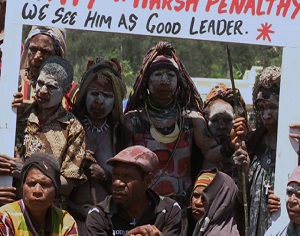 They came in droves, while others walked for miles as far as Bosavi to attend the rally. Their banners carried slogans expressing their grief.

Though they respected the decision of the Courts, they still could not come to terms with the sentencing of their leader, Francis Potape.

According to locals, during the local MP’s term in office, tangible developments have been seen and felt throughout the six districts of Komo-Magarima. And his conviction and jailing was a dark day for the people.

Deputy Governor for Hela Province, Thomas Potape, urged the people not to take matters into their own hands to disrupt services in the district.

He said funds will be raised to support legal fees to achieve an amicable outcome for convicted Komo-Magarima MP, Francis Potape.

Komo-Magarima has six local level governments with a population of 69 000 people. The LNG Gas pipeline runs through the district. Attempts to destroy the pipeline were stalled by the leaders.