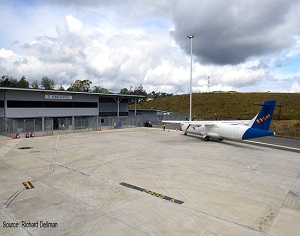 The agreement will see the opening of the Komo airfield for airline operators, and disaster relief operations in Hela Province.

The signing was witnessed by Papua New Guinea Prime Minister, Peter O’Neill, and other stakeholders at parliament.

Mr O’Neill said that the airfield is also a strategic location for the delivery of relief supplies in the Highlands region and surrounding areas.

This will see access for military operations on a case-by-case basis.

Once complete, the new airport will have a runway length of 3,200 metres with a 45-metre flight strip.

The National Airports Corporation will monitor the developmen’s to meet international Civil Aviation and PNG CASA rules and regulations.

The current Komo airfield was built by Exxon Mobil to facilitate the PNG-LNG project, and the company is excited to see the door open for airline operators.

Hela Governor, Anderson Agiru, welcomed the project and said that the signing and development is a milestone for the province.