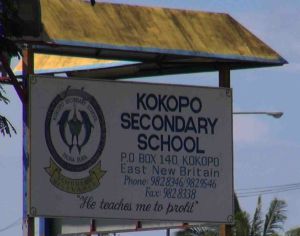 One of East New Britain’s oldest schools has celebrated its 40th anniversary.

Kokopo Secondary School, located in the heart of Kokopo town has lived through four decades, and continues to grow.

Today it accommodates 1,500 students and it;s listed as a model school in both the province and the country.

The effort put into keeping the school going over 40 years hasn’t been an easy task. Paul Raia, the current Principal, has played an integral part in contributing to the success of the school over more recent years.

To commemorate its 40 years of contribution into the provincial education, the school staged three days of festivity last week.

The provincial government have realised its importance, and for the first time in many years, have begun allocating funds to improve the school’s infrastructure.

Kokopo Secondary School is amongst a list of priority areas for the provincial government to look at, as Kokopo transforms into a much larger city.

“And it is the first of the many to come,” the Governor’said.

Car Ploughs through Stations of the Cross Procession