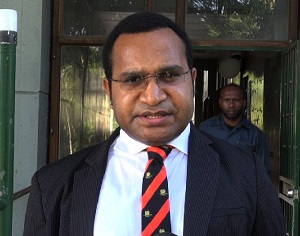 Koim, who has successfully avoided media controversy in recent months, responded to questions raised by politicians on the floor of parliament yesterday regarding delays in the clearing of public discretionary funds at the banks.

Member for Nuku, Joseph Sungi questioned whether the government could intervene to cut down the lengthy process of clearing district funding at the banks because, he said, it was slowing down development in the districts. The ITFS Chairman’s views on the role banks play in channelling subversively gained public funds has been aired before.

His outspoken views resulted in a closer working relationship not only with domestic commercial banks; through a partnership with the Australian Federal Police, banks in Australia were put on notice of illegally-attained national government funds being sent through their channels and accepted.

“The revelation by the minister for finance on the floor of parliament, that bank officials are receiving commissions to clear transactions, is not surprising. It is an indication of collaboration between politicians and bank officials to subvert even the remaining red flag systems at the banks.

He also explained that the Proceeds of Crime Act demands that banks are to conduct due diligence on financial transactions.

“The Proceeds of Crime Act established a final safety net to prevent fraudulent transactions. The Act places an onerous duty on financial institutions to ensure that they are not engaging, directly or indirectly, in transactions where they know or ought reasonably to know, to be proceeds of a crime.

According to Koim, financial institutions routinely have to make judgement calls, balancing profitability with anti-money laundering and anti-corruption.

“It costs money to put in place prevention systems and if one is inclined, there is big money to be made out of turning a blind eye.”