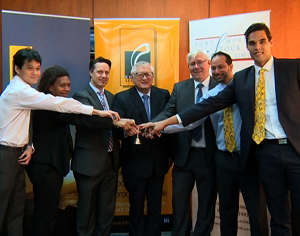 Kina Securities has become only the 22nd company in 16 years to be listed on the Port Moresby Stock Exchange.

The diversified financial services company was admitted to the official list of the POMSoX yesterday, with shares already selling at K2.50.

Wayne Golding, Director of Kina Securities, says this is another important step for the company by giving its customers a broader variety of banking and diversified financial services.

Minister for Trade, Commerce & Industry, Richard Maru, who was representing Prime Minister, Peter O’Neill, congratulated Kina Securities and says it was important to have more companies like this.

Earlier in the year, Kina Securities acquired Maybank and says it is keen on expanding its services even further to the rest of Papua New Guinea, be it in the areas of investment or banking.