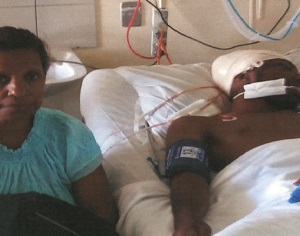 A student from Salvation Army Secondary School is fighting for his life at the Port Moresby General Hospital Intensive Care Unit after been brutality bashed by soldiers from Murray Barracks.

The incident happened on Saturday during the Kilakila Secondary Cultural Show at Coronation Primary School in Boroko.

The victim was part of the East Sepik Provincial Cultural Group who were physical assaulted by soldiers.

On life support and in a coma, Jeremiah Yinu has been in this state for the past two days at the Port Moresby General Hospital Intensive Care Unit.

He was part of the East Sepik Provincial Cultural Group who were physically and verbally assaulted by soldiers from Murray Barracks on Saturday.

According to the President of the East Sepik Students attending Kilakila Secondary School, there was a confrontation with soldiers while they were on their way to the cultural show.

This morning the students received more threats from the soldiers and had to be released from school.

They are concerned and in fear of their lives, calling on the military hierarchy to do something.

Deputy Principal Administration of Kilakila Secondary School Philemon Geidilo expressed disgust at the manner in which his students were treated at the hands of the soldiers.

As a concerned parent, Lester Mam wants these soldiers involved to be removed from the army and dealt with by the law.

Police have informed about the incident and are paying close attention to the condition of the victim before making arrests and laying formal charges on the suspects.

Despite directives issued by the Commander Brig. General Gilbert Toropo soldiers continue to be involved in such brutal acts.

This latest incident begs the question of whether the PNGDF will enforce the directive to remove ill-discipline soldiers or continue to cover up for their actions.