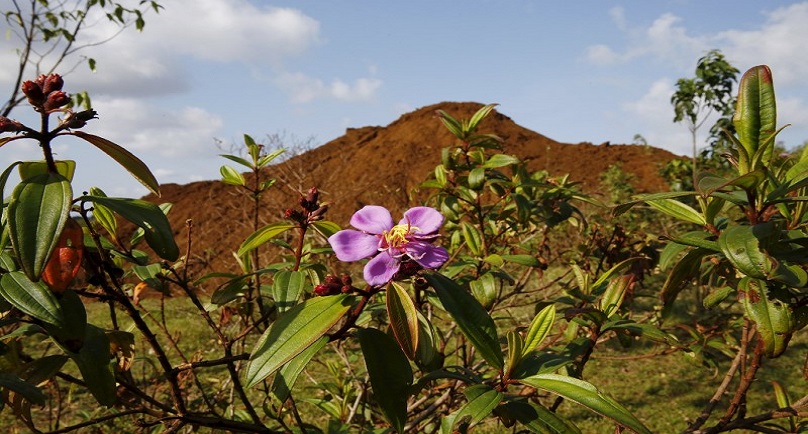 Image: A flower blooms in a durian orchard in an area exploited by bauxite mining companies in Kuantan, Malaysia, February 16, 2016. REUTERS/Olivia Harris

KUANTAN, Malaysia (Reuters) – Malaysian farmers of the famously pungent durian fruit are calling for tighter regulations on mining they say is destroying arable land and tainting the water they need to churn out their yellow, spiky-shelled crop.

Farmers in major growing state Pahang plan to spend nearly two weeks marching over 250 kilometers to parliament in Kuala Lumpur to protest the impact of bauxite mining on output of the food, sometimes described as Southeast Asia’s ‘King of Fruits’.

Parts of Pahang have been transformed over the last few years by a mining boom to feed China’s appetite for bauxite, a key ingredient of aluminium. There has been a public outcry over environmental damage, however, with mining blamed for polluting land and turning waters red near the state capital Kuantan.

That has piled pressure on the government, prompting it to impose a three-month ban on bauxite mining in early January, but durian growers such as Che Long Che Ali fear what will happen when the moratorium is lifted on April 15.

“We will march to submit a memorandum to parliament … I’m doing this for myself and all future generations to fight for our environment,” he said, adding that farmers wanted tougher regulations on bauxite mining or even a permanent ban.

“My durian trees didn’t fruit last year. Our rivers and the air we breathe are polluted. People have fallen sick,” Che Long said, with the march expected to begin around the middle of next month.

Bauxite miners contacted by Reuters declined to comment on the issue.

After Thailand, Malaysia is the world’s No.2 producer of durian, banned in many hotels and airports due to the sulphurous smell of its sticky flesh – although many consider that scent part of the eating pleasure. China is its key market for frozen durian and related products.

Malaysia’s durian industry is not huge – government figures show 2014 frozen shipments to China were worth just over $1.2 million – but the crop is a source of national pride.

Koh Yen Boon, a durian seller in Kuantan, said his sales volume dropped by about 30 percent last year due to lower output, driven by environmental damage and as more land was given over to mining.

“There was less produce to sell … The remaining trees were covered in red and brown dust,” he said.

Farmers blame ore dust for disrupting pollination, while environmentalists note that the habitat of birds, bees and bats – natural pollinators of the durian flower – are destroyed when land is cleared for mining.

The Malaysian Nature Society also said that land used for mining would likely become infertile due to heavy-metal contamination, meaning rehabilitation for agriculture would be long and expensive.

Bauxite mining in Kuantan boomed over the last two years as China shifted its sourcing of the material to Malaysia after former top supplier Indonesia banned exports.

Despite calls from residents and environmentalists to bring mining in Kuantan to a complete halt, mining industry officials expect activity to resume after the three-month ban.

“We expect to recommence mining, and we hope for adequate regulations to be in place to suppress any further impediment to the environment, especially from illegal mining,” said Keith Vaz, Malaysian Mining Club president.