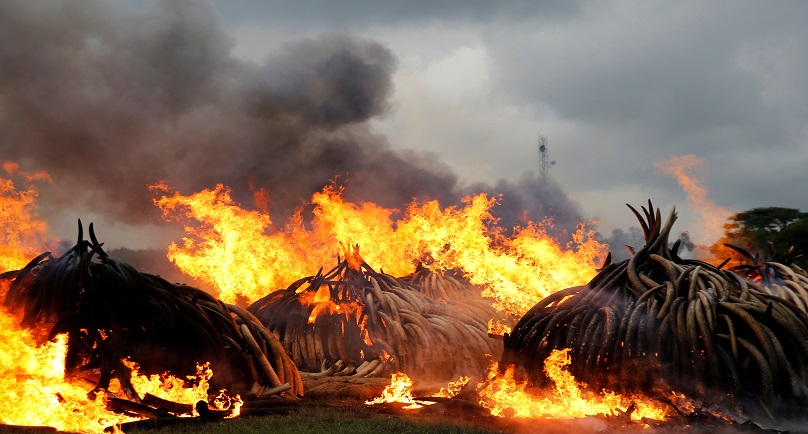 Image: A section of an estimated 105 tonnes of elephant tusks confiscated ivory from smugglers and poachers burns in flames at the Nairobi National Park near Nairobi, Kenya, April 30, 2016. REUTERS/Thomas Mukoya

NAIROBI (Reuters) – Kenya’s president set fire to thousands of elephant tusks and rhino horns on Saturday, destroying a stockpile that would have been worth a fortune to smugglers and sending a message that trade in the animal parts must be stopped.

Plumes of smoke rose as the flames took hold of tusks piled up in a game reserve on the edge of the capital Nairobi, destroying 105 tonnes of ivory from about 8,000 animals, the biggest ever incineration of its kind.

President Uhuru Kenyatta dismissed those who argued Kenya, which staged its first such burning in 1989, should instead have sold the ivory and the tonne of rhino horn, which by some estimates would have an illegal market value of $150 million.

“Kenya is making a statement that for us ivory is worthless unless it is on our elephants,” he told dignitaries before setting light to the first of almost a dozen pyres.

Kenya is seeking a total world ban on ivory sales when the Convention on International Trade in Endangered Species of Wild Fauna and Flora (CITES) meets in South Africa later this year as poaching poses an increasing risk to the species.

CITES banned commercial trade in African elephant ivory in 1989, but since then has permitted one-off sales.

Kenyatta’s call for an ivory trade ban was backed by Ali Bongo, president of Gabon, home to the forest elephant.

French Environment Minister Segolene Royal announced in Nairobi she was would introduce “a ban on any kind of ivory trade in France” after banning export certificates for ivory last year. She said she would encourage other European states to follow. “We need to kill the trade,” she said.

Conservationists say the original CITES ban, and Kenya’s 1989 burning, helped reduce demand and relieve a crisis for the elephant population but that one-off legal sales have revived the market.

The situation for rhinos is more precarious. There are fewer than 30,000 left across Africa and one species, the Northern White Rhino, is on the brink of extinction. The last three are kept in Kenya under heavy guard.

Kenya relies on tourism, with many drawn to safaris at luxury camps by the trove of animals Kenya boasts, particularly the “Big Five” – elephant, rhino, leopard, lion and buffalo.

Renowned conservationist and anthropologist Richard Leakey urged African and other nations to destroy their ivory stocks too. To those who refused, he said: “They are speculators on an evil, illegal commodity. There are can be no justification for speculating price rises in ivory down the road.”

Pledges last year by China and the United States, two of the biggest ivory markets, to enact almost complete bans on imports and exports have helped drive ivory prices lower.

But rhino horn prices are still rising, conservationists say. Armed patrols of sanctuaries and other measures have helped curb some illegal hunting but the animal’s future remains grim.

Kenya alone had 20,000 rhinos in the 1970s, falling to 400 in the 1990s. It now has almost 650 black rhinos. It is protecting the last three northern white rhinos as scientists race against time to find artificial reproduction techniques.

Poachers in Kenya can sell the horns of a single dead rhino for the equivalent of about $50,000 in local markets, earning in one night what would take them many years in regular employment.