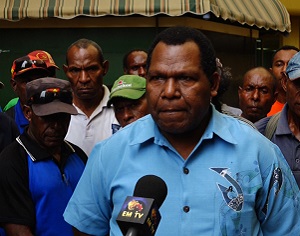 Gulf Governor Havila Kavo maintains his position as the Governor for Gulf province despite his eviction.

While responding he said he is the rightful Governor of the province after being granted bail over alleged misconduct in office.

Gulf Governor Havila Kavo responded according to Provincial and Local Level Government law there’s no provision that clearly give effect for his removal as the governor.

He said despite the move by other Gulf leaders including Kikori MP Mark Maipakai and Richard Mendani with their eight LLG presidents recognizing Jimmy Pokara as the acting Governor, he said he is the rightful governor according to law.

Havila Kavo was charged earlier this year for misappropriating more than K100,000 in 2010. The money was paid to him as part of his entitlement out of the Kutubu MOA Trust Account.

He said despite being out on bail he will continue to serve as the governor of the province.

Welgris Dominates 2-nil in First Half Over Besta