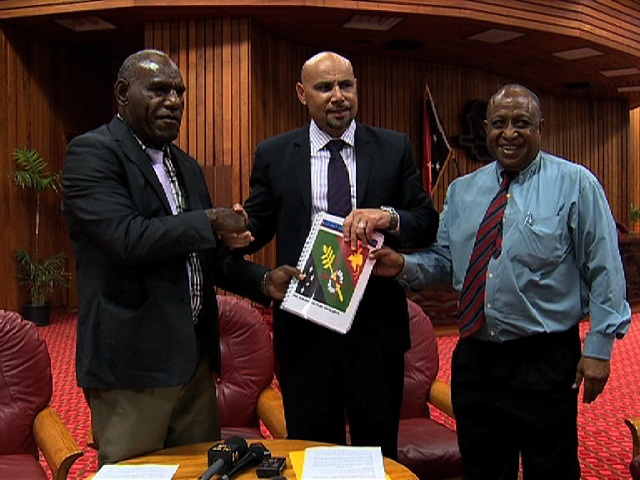 The Five Year Development Plan was presented by Karamui Nomane MP, Mogerema Wei whose electorate is not connected by road tothe Chimbu Capital of Kundiawa.

The plan’s main focus is roads.

While commendingthe MP and his administration for the 5 year development road map, Minister Able announced thatthe government is inthe process of finalising a development plan that will determine how much District Support Improverment Program Funds are allocated to electorates based on size and geographical location.

“We looking at a mechanism that some districts like Telefomin or Middle Fly and ther remote one’s like Samarai-Murua, even Manus itself will get a little bit of special consideration – and it’s calledthe equalisation formula which in fact cabinet has directed me to come up with when I took an earlier submission intothe 2013 budget so we are trying to use that into 2014,” said Minister Able.

The minister said this will be an integrated plan that will seethe proper execution of DSIP funds.

The Karamui Nomane MP’said road infrastructure has been factored asthe first step inthe next five years to open up access to service and markets giventhe resource rich status of his electorate.

“We have to start withthe basics and that isthe Roadso bethe first because wherethe road is goodthe ther services follows – without roads it is difficult to deliver basic services tothe people, or even to start up a business,” said MP Wei.

Ok Tedi Mining Limited to shut down mine temporarily