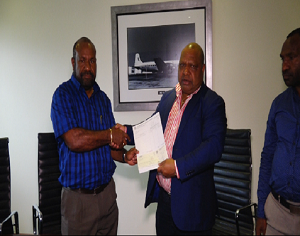 The contract has been awarded to Simply Blue Collar, a Southern Highlands company owned by former politician Michael Nali.

This money is part of the district’s appropriation of K4 million from the provincial budget. The next K2 million for infrastructure will be released once funds are available.

A cheque for K2 million was presented to the contractor by Southern Highlands Governor, Willam Powi. Governor Powi when presenting the cheque said this is just a smaller part of his bigger plans for Kagua Erave.

Managing Director and owner of Simply Blue Collar Michael Nali said the contract was awarded due to his experience and extensive record of working on larger projects throughout the past.

With this release, work for the Kagua Erave administration building is expected to start in the coming months.

Homosexuality still not an issue on Cook Islands PM’s Agenda