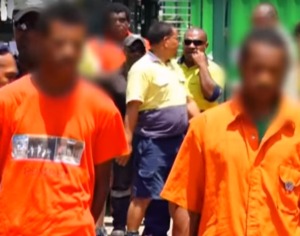 The Waigani National Court has granted K1,000 cash bail for the juvenile allegedly involved in the Kokoda rape and assault incident.

Judge Panuel Mogish ruled on the grounds that no primary police evidence was presented in court since the case was committed.

The 17-year-old was remanded at the Bomana Prison since his arrested in January.

He was charged with two counts of armed robbery and unlawful assault.

It was alleged that the defendant, together with another man, sexually assaulted and stole over K6,000 from a European tourist and his American girlfriend in December, last year.

Both accused were flown into Port Moresby from Northern province and were refused police bail.

The defendant’s submissions for bail were on the grounds that he was a juvenile and that he denied his involvement in the alleged offence.

After listening to the submissions, Judge Mogish told the court that there was no primary evidence of the alleged offence before him, and said the courts cannot hold anyone without police evidence.

The court also heard that there was no cooperation between the police officer who arrested the juvenile and the lawyer representing the state.

On these grounds, the bail was granted with the conditions that the defended remain in the National Capital District until his case is over, and that he should not interfere with any witnesses.