While market conditions continue to challenge junior mining companies working in Papua New Guinea, some small mining companies such as Gold Mountain and Frontier Resources are experiencing encouraging results from their exploration programs in the country. 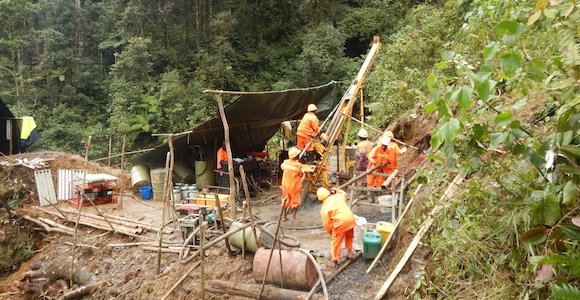 ‘One of the biggest challenges for a small company like Gold Mountain is raising capital for mining projects, especially during the exploration phase,’ he says.

‘With investors very wary of how ‘high cost’ operations can be in-country, we have kept a distinct focus on ensuring we are a low cost and low overhead company,’ Teng adds. 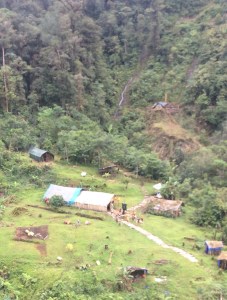 The Mineral Resources Authority anticipates total spending in 2016 will drop below 2015 figures, but says it is too early to report whether it will be lower than the total spend figures for 2014.

While some juniors are winding back their exploration programs, Gold Mountain is bucking the trend by moving forward with exploration at Crown Ridge at Wabag in Enga Province.

Five of these centered in a cluster where every pan collected free gold.

Encouraged by these results, company Director of Exploration, Matthew Morgan, believes that these systems have the capacity to produce world-class gold and copper projects.

Following results from trenching, Morgan says they have commenced an intensive bulk sampling exercise, with possible feasibility studies to follow, towards a Mining Lease application with the PNG Mineral Resource Authority.

‘As some of the free gold is very shallow, at around two metres depth—which is almost under the grass in some zones—there may be the potential for a low cost, low strip ratio free gold resource that could be quickly bought forward into production generating significant cash flow for the company,’ Morgan says.

‘We believe that the results to date warrant further exploration and work, and the investor community understands this and wishes to continue supporting the projects.’

‘McNeil is confident in the company’s current projects in Papua New Guinea and is keen to explore further.’

‘Papua New Guinea is blessed to be situated in a geological ‘honey pot’ that has produced multiple world-class resource projects to date, and a population that is amicable to mining and resource investment,’ Teng says.

In September, Frontier commenced drilling at Swit Kai, at its Bulago prospect in Southern Highlands Province.

‘The amount of drilling that we undertake will only be limited by the amount of capital that we have,’ says McNeil. He is confident in the company’s current projects in PNG and is keen to explore further.

Frontier Resources will undertake a capital raising later in 2016 to enable it to undertake exploration and drilling on the copper-gold targets at Muller. The aim is to complete additional drill assessment at the Bulago porphyry copper-gold and to cover working capital and costs.