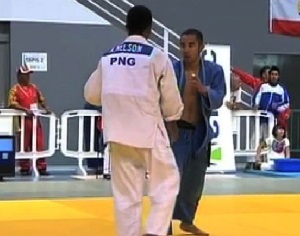 As part of Japan’s preparations to host the 2020 Olympic Games in Tokyo, they are spreading out their support to various sports that will be competing at the games.

Under the program “Sports for Tomorrow, leading to 2020,” the Japanese Government is selecting two sporting codes from each participating country to assist in the development for the Tokyo Games.

The two sports identified for Papua New Guinea is Judo and Swimming.

While swimming is a popular sport in the Olympics, it is gaining more interest in PNG; Judo is one sport that is still developing in the country.

To assist in raising the level of Judo in PNG, the Japanese government has assisted by supplying the PNG Judo Federation with training equipment, as well as experts to assist in the training.

The equipment included 100 Judo uniforms which will be used by the Judo clubs for training and local competition, while the expertise came from five Judo masters who arrived in PNG on September 18th and will be in the country until September 28th to conduct training camps and seminars for the sport.

PNG Judo has produced one Olympian in Raymond Ovinou, who competed at the London Games in 2012.

Those interested to attend Judo classes in Port Moresby can go to DBTI on Tuesdays and Thursdays from 4pm – 6pm and on Saturdays from 9am – 12pm.