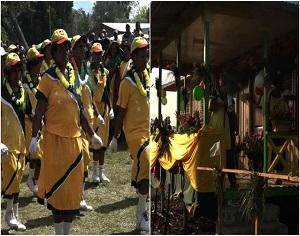 Thanks to a new organisation, women in Jiwaka have taken a new approach towards services throughout ward levels.

The Jiwaka Ecumenical Council of Women is the body now representing the interest of women in the new Jiwaka Province.

The organisation has over 16,00six registered members in all 6 Local Level Government Councils, including Banz, Minj, Anglimp, Nondgul, and two LLGs in Jimi District.

Jiwaka Ecumenical Council of Women has community based organisations in different wards which come under respective LLG presidents, who then report to the Provincial President, Rosen Kiap.

In the 2014 budget, more than K1 million was allocated to the group for implementing projects under different CBOs.

K450,000 of that funding allocation was used to build three centres across the three major districts of Jiwaka.

Women will now have training conducted in these centres with assistance from the provincial government and the Women In Business desk.

PNG Women in Business founder and director Janet Sape was in the province to officiate at the opening of one of the centres in Minj, South Waghi District.

Women Of Hope Give To Settlers