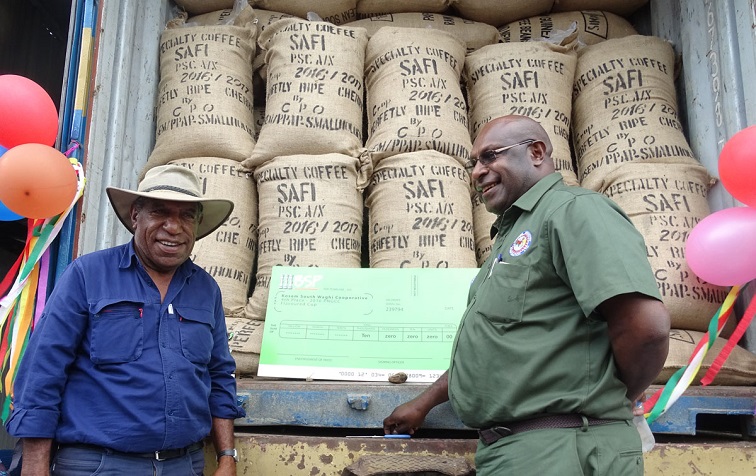 Two groups of coffee farmers in North and South Waghi electorates have made history to be first in Jiwaka Province, and the Highlands Region, to export their coffee directly overseas for a higher price under group marketing.

A container full of 320 bags parchment coffee was launched on Friday September 9, at Kosem Coffee Ltd factory premises at Banz station ready for shipment to South Korea via Lae.

This is an initiative of Kosem, a Lead Partner of Productive Partnerships in Agriculture Project (PPAP- coffee component), to organise selected farmers to produce quality coffee and sell at a special market arrangement.

“This is a milestone achievement for coffee in Jiwaka as a new province. We will host the first coffee forum in Jiwaka to discuss ways forward for the industry,” says Charles Dambui, CEO of Coffee Industry Corporation (CIC).

After all internal costs of processing and marketing, the farmers will receive K5.50 plus per kilogram of parchment compared to roadside price of less than K4 per kg.

The groups namely Kosem/PPAP – North Waghi and Kosem/PPAP- South Waghi are Co-Partners of Kosem Coffee under CIC-PPAP industry rehabilitation program. They came 4th and 5th out of 114 Arabica competitors at the recent National Coffee Cupping Competition in Lae.

Their total price of K17,000 will be used to construct raised beds to dry coffee instead of on the ground, hence aiming for higher quality in the coming years.

The Director of Policy & Planning of DAL, John Kendiga, whilst congratulating Kosem and its Co Partners for this milestone achievement, challenged the growers to produce more with the same quality as per the market demand.

The CEO said to revisit the participation criteria of farmer groups to also produce adequate coffee in terms of production and quality for export as CIC Export Licensing encourages farmer coffee cooperatives to export coffee as well.

The CEO acknowledged the World Bank, International Fund for Agricultural Development (IFAD) and GoPNG for funding PPAP coffee rehabilitation effort which in a very short time is producing some remarkable results.

The Managing Director of Kosem Coffee Ltd, John Munul, and his son Mark, who is the Project Coordinator of the CIC-PPAP funded project, were acknowledged to begin the change in farmers’ attitude to participate in group marketing for export away from the usual selling of cherries or parchment on roadsides.

Lupari Urges Departments and Agencies to Collaborate for FIFA U20 WWC