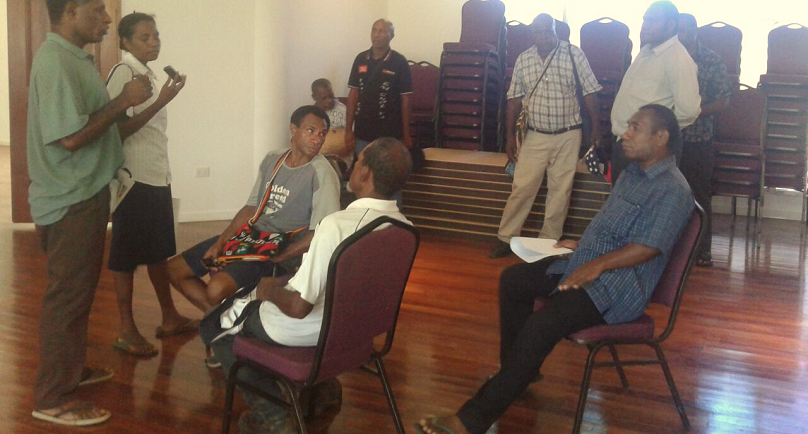 Supporters from the officer of the Madang Governor, Jim Kas, unexpectedly walked into a media conference today, facilitated by Sumkar MP, Ken Fairweather. The gathering was held in regards to a vote of no confidence in the governor.

The Sumkar MP had already left, when the governor’s supporters entered the area, demanding for an end to the gathering. By then, the conference had already ended.

The protestors were led by Deputy Governor, Rama Marisan, and Middle Ramu District’s Arabaka LLG President, Joe Maira, among others. Media representatives, who were still present, were told not to report on today’s events, by the group.

The deputy governor argued against Mr Fairweather’s statements to the media.

The reasons behind the Sumkar MP’s move to call for the vote of no confidence include: the governor’s failure to hold regular provincial assembly meetings; the non-acquittal of 2013 and 2014 provincial government returns to the public accounts committee; lack of effort to address the land grabbing and environmental issues in the province, among other reasons.

In response, the Deputy Governor, Rama Marisan, dismissed claims by the Sumkar MP. He said that everything stated by Fairweather is being accounted for by the governor’s office.

Marisan claims that the Sumkar MP is “only playing politics” and that he had “no hards facts” to back his allegations. The deputy governor added that Fairweather lacked the support of other parliamentarians, and has yet to speak directly to the Madang governor, to clarify his queries.

Sumkar MP, Ken Fairweather, says that the issue is a provincial matter, and should be addressed at the provincial level.

Hunters Final Squad to be Named