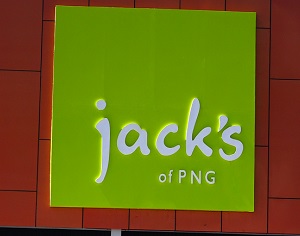 There’s been a new addition to the chain of stores at the Waigani Central shopping area in Port Moresby.

Jack’s of PNG was officially opened today as a new retail business belonging to the City Pharmacy Limited Group.

CPL Group said Jack’s of PNG is a gamechanger for the whole Waigani Central property and is expected to draw value-loving, fashionable shoppers in the nation’s capital.

CPL’s new retail business is a joint venture with Jack’s of Fiji. Jacks of PNG carries specialty brands like Rip Curl and a lot more.

The children’s section has clothes for kids ranging from infants to the pre-school aged with Fijian-made outfits from Jack’s Garment Limited. Women’s section features the lingerie, casual wear, formal attire, bags & hats. The men’s section featured Jack’s exclusive brands First Tribe and Qaqa in the Sportwear. From teen humor, surf brand Rip Curl and the Bula wear, Jacks of PNG has something for everyone.

This new K5 million retail business marks an important expansion for the company and a significant step towards elevating the shopping experience in PNG.

EM TV spoke to CPL Chairman, Mahesh Patel, earlier in the week about Jack’s of PNG.

With an increasing number of residents and office spaces in nearby areas, CPL Group’s Waigani Central is poised to be the preeminent venue for a complete shopping experience.

Retail Manager, Yogesh Samy, said there are plans to have PNG designed clothes on the shelves sometime in the year.

Jack’s of PNG hopes to expand to other centres in the city and country, provided there is ideal location available.

NID Registry A Compulsory For All Citizens