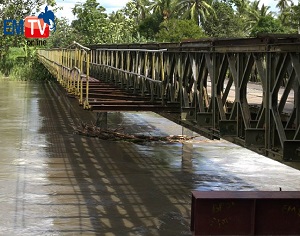 Kairuku-Hiri MP, Peter Isoaimo, has described the discharging of mine tailings from Tolukuma gold mine into the rivers as “a clear sign of genocide.”

Tolukuma gold mine is 100 per cent owned by Petromin PNG Holdings, a State-owned company, after its acquisition from Australian-based Emperor Mines Ltd in February, 2008.

Tolukuma is located in the mountains of Goilala district, inland of Kairuku and Mekeo constituencies in Central province, on the Owen Stanley Range at an elevation of 1,550 metres, north of Port Moresby.

The MP said that the mine tailings are being discharged into the Angabanga River upstream, and flows down to his electorate.

The river flows through a number of Mekeo villages.

Mr Isoaimo claimed sediments are piling up and scientific reports carried out shows “the results are terrible.”

“Results from the blood cells taken, it proves that there’s revelation of metals in the bloodstream…” Isoaimo said.

“I am awaiting my Council Presidents and Mekeo Council of Chiefs to come forward and whatever resolutions they come up with, I have no choice but to help them file a legal suit, to be fairly compensated.

“You know we are dealing with human beings… This is a clear sign of genocide…” he continued.

Locals are raising concerns that the river is overflowing like never before. During rainy seasons the roads into inland Mekeo areas near Angabanga River are now underwater.

Two scientific studies have been carried out. The first by Oxfam Australia, some ten years ago and other by Dr Sylvester Kotapu, who was engaged by the Central provincial government.

Both reveals a significant buildup of metals in the bloodstream of local people downstream, the local MP claimed.