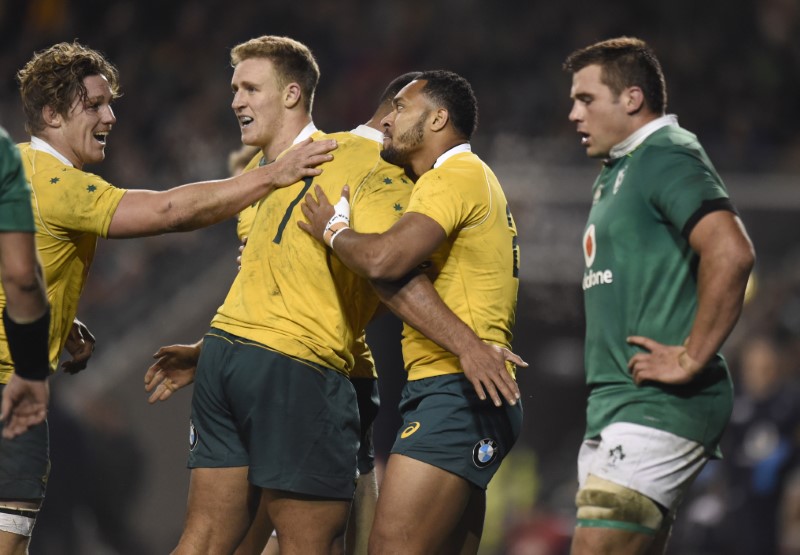 DUBLIN (Reuters) – Ireland claimed a third southern hemisphere scalp in six months by surviving a slew of injuries and an improbable comeback to beat Australia 27-24 on Saturday and inflict the Wallabies’ first defeat on their European tour.

Leading 17-0 just before halftime, Ireland were forced to field their replacement scrumhalf and flyhalf at fullback and wing and Australia took advantage to move ahead before a Keith Earls try completed a famous and wild home victory.

“They’re a great bunch of boys, we had to dig deep with so many changes. There’s some very, very young kids out there who stood up today,” Ireland captain Rory Best, who became the fifth Irishman to reach 100 caps, said in a pitch-side interview.

After failing to turn 66 percent of possession into a try in last week’s loss to New Zealand, Ireland declined early shots at goal and got their just reward when Iain Henderson immediately punished flanker Dean Mumm’s sin-binning.

Already missing Johnny Sexton and Robbie Henshaw, and having lost Sean O’Brien just before kickoff, the injuries began to snowball as Rob Kearney and Andrew Trimble exited within the first half hour.

Yet it mattered little, even with third-choice flyhalf Joey Carbery having to fill in at fullback, as a further flurry of linebreaks and relentless carries led to a glimpse of just why Ireland are so excited about Garry Ringrose.

The 21-year-old centre, earning his third cap, picked up a stray pass near the line and found a series of gaps so invisible to anyone else that referee Jerome Garces had to check with his television official, asking the question “how did he do that?”

Looking set to take their handsome advantage into the break, the hosts were handed a reminder of just how dangerous Australia can be when Dane Haylett-Petty finished off the slickest of moves to cut the gap back to 10 points.

Things got worse when centre Jared Payne failed to emerge after the break and with replacement scrumhalf Kieran Marmion in to make up the most makeshift of backlines, Australia struck almost immediately with a Tevita Kuridrani try.

Paddy Jackson handed an increasingly overawed Irish defence relief with a penalty but they were being torn apart and a try from electric replacement Sefanaia Naivalu gave the Wallabies the lead for the first time before the hour.

Yet Ireland somehow dragged themselves back into the game with Earls’s try and their rejuvenated defence hung on for the final 15 minutes to follow up recent wins over South Africa and New Zealand.

Australia complete their European tour with a match against England at Twickenham on Saturday.

“We’ll need to be 40 minutes better to beat England,” Australia coach Michael Cheika said. “You can’t come for just one half.”