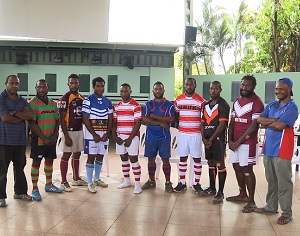 The 2016 Coca Cola Ipatas Cup Southern leg of the tournament is set to begin this weekend with 16 teams confirmed to take part.

The Ipatas Cup is the biggest off season rugby league competition in the country and attracts various raw talents nationwide.

Teams competing in the Ipatas Cup Southern leg met with tournament organisers, where they received the draws for this weekend’s competition.

The Murray Barracks oval has been confirmed as the host venue.

The tournament will be played this weekend, and the teams that qualify for the finals will play off next weekend, for a chance to be the crowned champions.

Among the teams in the tournament are the youths from Port Moresby North East, who have received support from Carl Okuk, who has sponsored 8 teams into the competition.

Tournament organisers have appealed to participants to play in the true nature of the sport, and abide by the competition’s governing rules.

The winner of the Coca Cola Ipatas Cup southern leg will then travel to Lae, to compete against the other regional winners.

TIPNG on State Agencies in Addressing Corruption Complaints from Public