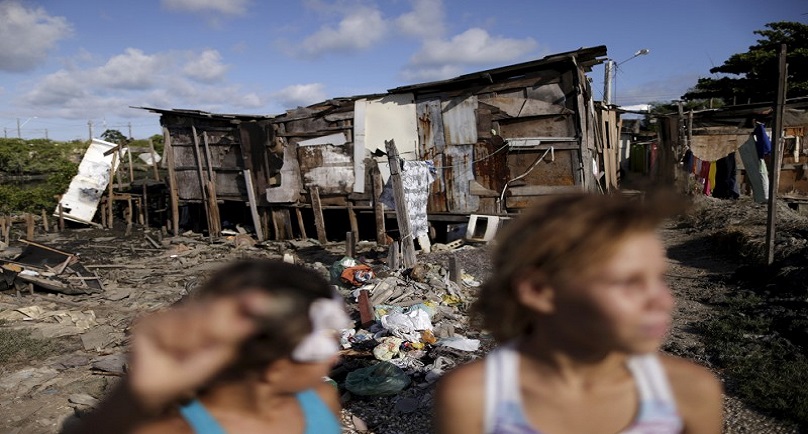 RIO DE JANEIRO (Reuters) – The mosquito, a Brazilian saying goes, is a democratic devil – it bit’s rich and poor alike.

But an outbreak of the Zika virus has revealed deep inequality when it comes to who bears the brunt of living among the insects.
“

You can see the swarms of mosquitoes around the trash heaps here in my neighborhood,” said Gleyse da Silva, who lives in one of the poorest parts of Brazil’s northeastern city of Recife, at the epicenter of the Zika outbreak.

Silva contracted the mosquito-borne virus while pregnant and gave birth in October to Maria – one of more than 700 children born with microcephaly in Brazil since the Zika outbreak was detected last year.

The condition, strongly suspected to be linked to the virus, is marked by stunted head and brain growth, leading to developmental problems.

The densely packed Ibura neighborhood where Silva lives lies a short distance from Recife’s glossy beach-front high-rises but conditions are a world apart.

Its streets, home to over 50,000 people, are strewn with rubbish and just 10 percent of households have sewage or running water, making it a fertile breeding ground for mosquitoes.

“Sometimes the city comes to collect the garbage, but mostly it just piles up,” the 27-year-old told Reuters.
Brazil made significant gains against inequality over the past decade, hauling some 40 million people out of poverty. But the Zika outbreak, detected for the first time in the Americas last year, and the worst recession in decades have exposed the limits of Brazil’s faded boom.

Decades of rapid and chaotic urbanization in the nation of 205 million people have left many impoverished areas without basic sanitation, putting the poor at far greater risk of contracting Zika and other mosquito-borne viruses.
Some 35 million Brazilians have no running water, over 100 million have no access to sewage, and more than 8 million city dwellers live in areas that lack regular garbage services, according to the most recent census in 2010.

Last year, some 1.6 million cases of the dengue virus were reported, the most since records began in 1990. The virus, spread by the same Aedes aegypti mosquito as Zika, kills hundreds annually.

“The only thing that is going to break the cycle of epidemics will be a sharp increase in the investment and construction of infrastructure that provides basic sanitation,” said Dr. Vera Magalhaes, professor of tropical medicine at the Federal University of Pernambuco in Recife, where she has spent three decades studying dengue and now Zika.

“Until that happens, we’ll live with this contrast in Brazil, where the rich have first-world sanitation and the poor live in the most precarious conditions imaginable, making them by far the most vulnerable to these illnesses.”

Urca has one of Rio’s lower rates of dengue, despite being surrounded by lush vegetation.

“We were worried about Zika, given all the news and the fact my wife was pregnant during such a scare,” said Marcos Lira, his boy asleep on his shoulder. “But here they pick up the garbage three times a week and everybody has water in their house.”

Lira, the superintendent for a luxury condo where he lives rent-free, grew up in the poor northern Rio neighborhood of Vila Isabel. The rate of dengue was five times higher there than in Urca last year, government statistics show.

“It’s the same city but the health situation couldn’t be more different,” he said. “Urca is a world apart from where I was raised.”

Brazil does not track the economic class of Zika victims but the virus appears to be disproportionately affecting the poor. Reuters has interviewed over 40 women who contracted Zika during pregnancy and gave birth to a child with microcephaly.

The interviews, conducted in both advanced hospitals where they sought treatment and towns and neighborhoods where they live, showed all of the women came from a poor background.

Even in the parched interior of northeastern Paraiba state, where conditions are far less favorable for mosquitoes than in tropical Rio, poor infrastructure allows them to flourish.

Josemary da Silva, the mother of a 5-month-old boy born with microcephaly, only has running water in her cramped one-room home when a truck arrives to fill a makeshift cistern she shares with a neighbor.

“Weeks go by before we see that truck,” said Silva, 34, who is unemployed and gets by on a government cash-transfer program that provides her about $100 a month. “In the meantime, we have to buy water, 10 little buckets at a time.”

Across the region, residents store water in any container available – often without lids – creating the ideal habitat for Aedes aegypti to lay its eggs.

“Even with a net my baby wakes up covered in bit’s,” said the mother of four. “There’s nothing I can do against the mosquitoes. There’s too many of them.”

Brazil increased sanitation investment in recent years, virtually all focused on expanding patchwork or non-existent water and sewage networks in cities with over 500,000 people.

But a watchdog group monitoring nearly 350 projects says Brazil’s notorious bureaucracy and inability to complete infrastructure projects has led to one-fourth of the works being paralyzed and another one-fifth suspended.

“What’s shocking is that we’re the world’s seventh or eighth largest economy, and despite our current economic crisis, there is no lack of money that could be put toward making these vital improvements,” said Magalhaes, the professor in Recife. “But it’s obviously not a political imperative to do so.”

There was a period when Brazil and other Latin American nations made huge advances against the Aedes aegypti as part of efforts to wipe out yellow fever, which the mosquito spreads.

In 1958, the Pan-American Health Organization declared Brazil free of the insect. A decade later, after political will and institutional funding dried up, the mosquito was back.

It returned as Brazil was rapidly urbanizing, with tens of millions flooding into cities. Today more than 11 million Brazilians live in slums that provide footholds for mosquitoes in urban areas.

Infrastructure experts forecast it could be decades before Brazil achieves universal sanitation.

For now, soldiers go door-to-door in the hardest-hit areas, inspecting homes for open containers with standing water, which mosquitoes seek out to lay their eggs.

TV campaigns tell citizens to use repellents the poor cannot afford and wear long-sleeve shirts and pants in the tropical summer.

“Sending soldiers out to combat mosquitoes makes a big splash in the media, and in fairness it does help people understand the importance of basic sanitation,” said Alceu Galvao, research coordinator at Trata Brasil, a sanitation watchdog. “But it will not remotely solve the problem.”

Much remains unknown about Zika, including whether it causes microcephaly in newborns. Brazil has confirmed more than 740 microcephaly cases that it believes are linked to Zika and is investigating more than 4,200 suspected cases.

Complicating the fight, some entomologists in Brazil believe the Aedes aegypti, long thought to only lay its eggs in clean water, may be reproducing in waters polluted by sewage.

“If the mosquitoes do adapt to sewage, we are in serious trouble,” said Dante Ragazzi Pauli, head of the Brazilian Association of Sanitary and Environmental Engineering.

“We are already in an incredibly grave situation and our only way out is to build basic sanitation. But we lack the investments, we lack the organization. I don’t envision great advances for another 50 to 60 years.”