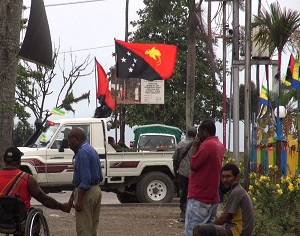 The marking of the country’s 40th independence anniversary is seeing the streets of Lae streets filled with flags, bilas and other attractions.

Lae’s EMTV crew took to the streets to see what some of the older and younger people think after 40 years of independence.

The city’s senior citizens were keen to make comparisons of the past and now – 40 years on.

The country’s 40th independence anniversary in Lae has attracted a showcase of flags, traditional wear and a spread of provincial colours.

Residents in Lae both young and old had a lot to say about the country’s progress after 40 years of being independent.

60-year-old Ayuc Hofagao, a retired public servant, worked with the Morobe Provincial Administration for over 20 years.

She was 20 years old when PNG gained independence in 1975.

He said the trend of education is changing with time.

Melvin Mou, a grade 10 student from Lae Secondary School said the school had staged a fun day of independence celebrations in traditional wear and provincial colours.

It has been a celebration of spectacular colours of flags and clothing that will be leading up to the country’s birthday tomorrow.