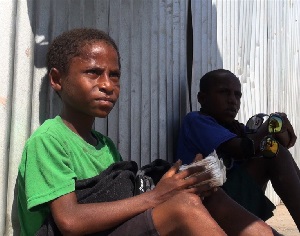 The increased number of street kids in NCD has prompted NCD Governor Powes Parkop to query the growing phenomena.

Governor Parkop was concerned that it was not a cultural norm for Papua New Guinea to have an increased number of street kids.

Another important issue brought to parliament’s attention is the growing number of child pornography which has now become accessible through the internet and other mediums. Governor Parkop was of the view that Papua New Guinea has land and food, and therefore could not be disadvantaged or landless, let alone have street kids.

He said although church’s and non-government organisations have built shelters and organisations to deal with these problems, he questioned the government’s position on orphanages and disadvantaged children.

Governor Parkop was also worried about the growing number of pornographic material circulating in the city and children accessing these illegal sit’s online, questioning the functions of the National Censorship Board.

In another related matter, Wabag MP Robert Ganim asked if the policy on disadvantaged children was nearing completion, as it has taken almost one year to compile the report.

Minister Gore assured the house that her department will soon complete the report and also bring to parliament the Lukautim Pikinini Act next week.

Wau Sees the Opening of a New Store