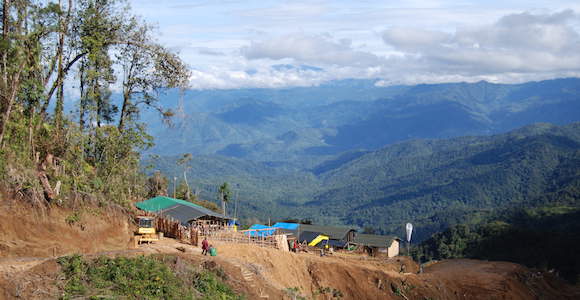 ‘One clear advantage we have is our High Grade Zone, with production output expected to increase–and so too, our cash flow,’ says Russ Parker.

Although ASX-listed Crater Gold Mining recently announced plans to resume exploration at the site’s Mixing Zone (a former BHP tier-1 asset), it initially focused on developing the smaller High Grade Zone, following the granting of a Mining Licence to its subsidiary, Anomaly Ltd,  in November 2014.

This was a response to the challenging market conditions, says Parker.

‘The priority was to first develop the High Grade Zone in order to deliver early cashflow, instead of continuing to drill out the Mixing Zone project to shore up its substantial resource,’ Parker explains.

Crater Gold Mining reported a maiden inferred resource estimate of 44,500 tonnes at 11.9 grams per tonne for 17,100 ounces of gold.

Considering the project is already in production and has processing facilities on site, the maiden resource paves the way for increased production with minimal additional capital expenditure or development time.

‘The key for us is to continue to increase production output at the High Grade Zone mine,’ says Parker.

‘Our near-term plan sees this happening as we source new material from the central high grade gold block of the mine and through recent upgrades to our processing plant.’

Referring to a recovery this year in commodity prices, including gold, Parker says he expects more investment to flow back into Papua New Guinea for exploration and development.

However, as a junior explorer operating in an unstable market, the company’s priority remains to become a profitable, low cost, high margin gold producer as soon as possible.

‘Our hope is this will help identify further high grade zones that could lead to expanding the current resource.’

On the back of recent success at the High Grade Zone and resuming drilling at the Mixing Zone, Parker believes the company is making great strides towards achieving this.

Crater Gold Mining expects mapping and sampling between the High Grade Zone and Mixing Zone to provide data that improves its understanding of the geological controls, enabling the modelling of these zones.

‘Our hope is this will help identify further high grade zones that could lead to expanding the current resource, and/or be exploited by our existing plant on site,’ Parker explains.

‘Parker says the company has only just scratched the surface of Crater Mountain’s potential.’

On completion of mapping and sampling work, the company expects to commence drilling with a view to better identify higher grade gold.

While the short-term focus is to develop production at the High Grade Zone, looking into the future Parker says the big picture is to unlock further potential.

‘Besides the Mixing Zone and High Grade Zone projects, there is world class potential hinted at by indications of porphyry structures already identified,’ he says.

With more than 14,500 metres of diamond drilling completed over the past two decades, Parker says the company has only just scratched the surface of Crater Mountain’s potential.