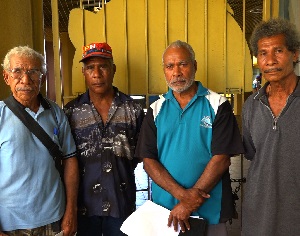 The process of registering an Incorporated Land Group is being questioned by a group of traditional landowners.

This group is from the Yule Island, in the Kairuku District of Central Province.

Among their concerns is the length of time it takes for the ILG Division to respond to objections they raised, in relation to an ILG advertisement on land on Yule Island.

Joe, Lois and Camilio are from Siria village on Yule Island.

They are in Port Moresby because they want to know the status of an ILG registration application, which they say covers their communal land.

Joe Baupua is from the Obia Pokina clan. He says, this ILG registration is happening without their consent.

He said they found out portions of their land were being registered into an ILG, when they became aware of a newspaper advertisement by the ILG Division that asked for any objections to this particular ILG.

The advert was placed in the papers following an application by a group called Roro Watewate who claim ownership of the land listed in the advertisment.

Joe says, since they followed due process in lodging their objection, they returned to Yule Island to await a response from the ILG division.

After 16 months of waiting, they returned to the city to find out at the Lands department that their objection letter was not on file. The only objection the ILG Division had of the application in question was from a group on the mainland, Abiara Oreke, because some portions of land under this application is on the mainland.

“This came as a shock to us because we are aware of 14 others who have lodged their complaints,” Joe says.

In their objection letter they claim the clan applying for this ILG is a “paper clan” and that it is non-existent.

They also claim that much of the land that is being registered is communal land that people use to: “..catch fish, prawns and collect crabs, shells and obtain trees for yam sticks and for building houses, fences and collect firewood.”

They fear the registering of their communal land would mean villagers would pay for these traditional uses.

They also claim that there have been no visits by the ILG division to assess their situation.

“No team from the lands department has come to the island to survey the land and to assess the land that these group claims as their properties,” Camilio Koae from the Koae Kupuna clan says.

They say, due the numerous reports regarding corruption within the lands department, they fear their land could be registered without their consent, and through corrupt means.