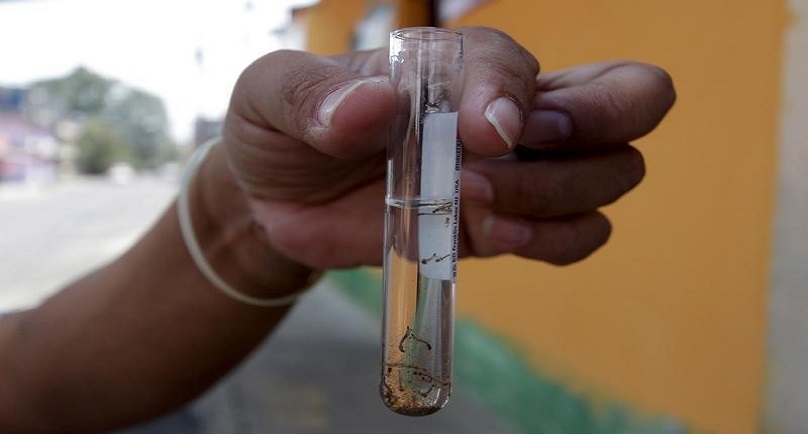 Image: A municipal health worker shows off a test tube with larvae of Zika virus vector, the Aedes aegypti mosquito, as part of the city’s efforts to prevent the spread of the Zika, in Guatemala City, Guatemala, February 2, 2016. REUTERS/Josue Decavele

RIO DE JANEIRO (Reuters) – One major hurdle is thwarting efforts to measure the extent of the Zika epidemic and its suspected links to thousands of birth defects in Brazil: accurate diagnosis of a virus that still confounds blood tests.

Genetic tests and clinical symptoms have enabled scientists to partially track Zika, and Brazil guesses up to 1.5 million people have been infected in the country.

The World Health Organization says as many as 4 million people could become infected across the Americas and that Zika has already been locally transmitted in at least 30 countries.

But a true measure of the outbreak and its implications is impossible until doctors can quickly and reliably identify Zika through serology, a common test of blood contents that measures antibodies triggered in the immune system by a given infection.

Laboratories in Brazil, the United States and elsewhere are rushing to develop serology tests that can accurately identify Zika antibodies while ignoring those triggered by other related viruses with similar structures. For years, the similarities have confused serology research.

Brazil’s government, desperate for tests to deploy at clinics and hospitals across the continent-sized country, hopes such a test could be developed in months.

Many researchers are skeptical.

“The likelihood of this happening soon is close to zero,” says Robert Lanciotti, chief of the U.S. Centers for Disease Control and Prevention’s diagnostics laboratory in Fort Collins, Colorado. “It is a long-standing problem that many people have been unable to solve even with cutting-edge molecular biology.”

At stake is knowing just who may have carried an infection that does not even show symptoms in four out of five people who get it. Even for those that do get the aches, mild fever and rash most associated with Zika, the symptoms can easily be confused with those of other tropical maladies.

Sure diagnoses would also enable scientists to better understand suspected links to microcephaly, a condition marked by abnormally small head size that can result in development problems.

Brazilian officials believe Zika may be associated with more than 4,000 suspected cases of microcephaly since October. Researchers have identified evidence of Zika infection in 17 cases, either in the baby or in the mother, but have not confirmed that Zika can cause microcephaly

The lack of clear diagnoses is part of the reason that the number of confirmed links between Zika and microcephaly lags so far behind the number of those suspected.

“The testing available now is very limiting because we need to know far more about who actually had this infection to be able to research the virus and its complications,” says Claudia Nunes dos Santos, a researcher on Zika serology and the director of molecular virology at a lab operated by the Oswaldo Cruz Foundation, a prominent government health institute, in Curitiba, in southern Brazil.

VIRAL RESEMBLANCE
So far, confirmed cases of Zika have been proven by so-called PCR tests, which identify genetic material from the virus but are available only at major laboratories and can only be used during the few days when the virus is causing symptoms in patients.

Serology, on the other hand, is used widely at most hospitals and for many viruses can detect antibodies for months or years after an infection.

With Zika and the related family of flaviviruses, which cause yellow fever, West Nile, dengue and several other tropical illnesses, serology stumbles because of resemblance among a protein they share.

The resemblance causes so-called “cross reactions” when searching for antibodies, meaning that past infection by any one of the viruses can make it’seem as if a patient had one of the others.

In a country where dengue is prevalent, and many people have taken yellow fever vaccines, the problem to date has been intractable. The most advanced methods so far, which use a technique called neutralization to measure specific antibodies, still fail when used on samples from people with previous flavivirus infections.

“There is a test, but it’s not a good test,” says Mauricio Lacerda Nogueira, head of the virology lab at the São Jose do Rio Preto medical school in the state of São Paulo. “It’s not going to work with someone who has been exposed to related viruses.”

Still, some researchers are optimistic, arguing that the urgency of the Zika outbreak is leading to more concentrated research by a greater number of scientists.

Some small private laboratories say they have already developed more accurate serology for Zika, even though none has gone through the rigorous process of validation by the scientific community and regulators.

Such validation is essential not just to determine the reliability of a test’s claims, but also to measure them using geographic, genetic and other variables.

And while partial progress may be welcome for epidemiological purposes, such as calculating the number of cases and determining the rate of contagion, doctors and patients need certainty to make clinical decisions.

That is a particularly difficult issue when it comes to an illness that may make some pregnant women, after testing positive, want to consider abortions – especially in Brazil and many other countries in Latin

America where terminating pregnancies is illegal.

“You have to be careful of what the implications are,” says Michael Diamond, a physician who researches flaviviruses at Washington University School of Medicine in St. Louis. “The threshold for clinical decisions must be high.”

Copyright case against Bieber, Usher should be dismissed – judge

Over 1,200 Students learn about the SDGs from the United Nations