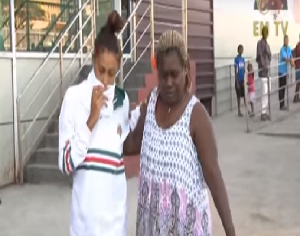 Samson Ikasa will stand trial for the attempted murder of Monica Naggy.

On Saturday, members of the criminal investigation division carried out formal investigations with the victim, allowing EMTV to film the proceedings.

Acting on the victim’s statement, police investigators were led by Monica to the locations of where she was attacked by Ikasa, going over specific details of the events that occurred on the night of March 19.

According to Detective Joe Puana, it is crucial to obtain all necessary information of the occurrences of the night the crime was committed in order to build a strong case for the courts.

Despite Monica being in great pain and needing an aid to help her walk, she summed up the strength to comply with investigators and spoke on camera of her tragic ordeal.