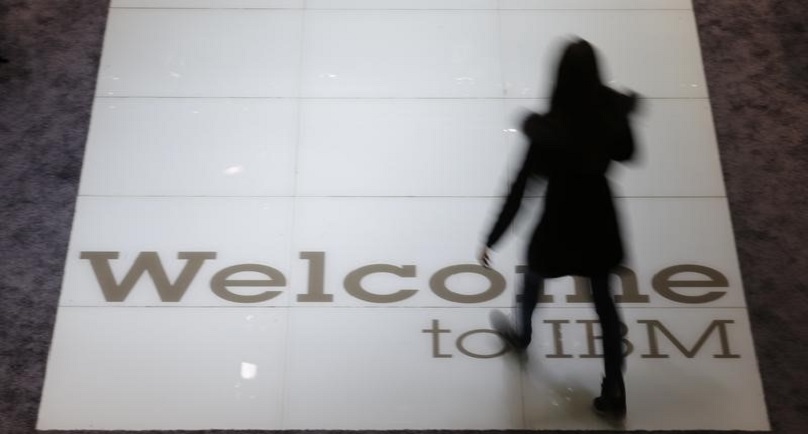 Image: A woman walks over a welcoming sign at the booth of IBM at the CeBIT trade fair in Hanover March 15, 2015. REUTERS/Morris Mac Matzen

(Reuters) – International Business Machines Corp’s shares touched a five-year low on Wednesday, a day after the company forecast weak earnings, underscoring challenges in its software business as it transitions to new growth areas.

The company’s shares were down 6 percent at $120.40 in early trading. At least 11 brokerages lowered their price target on the stock.

IBM forecast 2016 adjusted earnings of “at least” $13.50 per share, below the average analyst estimate of $15 per share, and reported a drop in revenue for the fifteenth straight quarter.

While a strong dollar reduced IBM’s profit by $300 million in the fourth quarter and is expected to lower 2016 pre-tax profit by $1.3 billion, weakness in its software division remains a key concern.

Revenue at IBM’s software business, which accounts for more than a quarter of the company’s revenue, fell about 11 percent to $6.78 billion in the fourth quarter.

“We continue to think that the software segment represents the largest risk to ongoing top- and bottom-line financial performance, and thus also IBM shares,” BMO Capital Markets analysts wrote in a note to clients.

The brokerage cut its price target on the stock to $135 from $155 and reaffirmed its “market perform” rating.

IBM has been restructuring its business to focus on high-margin products such as cloud, mobile security and big data, but has failed to make up the shortfall with newer initiatives.

(Reporting by Supantha Mukherjee in Bengaluru; Editing by Saumyadeb Chakrabarty)

Government to Save Billions